The End of Light

THE END OF LIGHT

“…Yet from those flames no light, but rather darkness visible.”

The Stravinsky Institute Foundation presents The End of Light – an art event at the Academy.  The venue is an architectural gem and an Edwardian landmark that once housed the New York Academy of Science. Its grand neo-classical interiors serve as a backdrop to the two-day show featuring art installations and performances. The End of Light is a farewell to the mental frame of the Enlightenment expressed through a variety of media. The End of Light presents a group of international artists, who channel their concerns and postmodern ambivalence into painting, sculpture, installation, performance, music, photography and video projection. The artists belong to different generations but they all share fin de siècle sensibilities. The “visible darkness” of our time, appealing to the artist’s intellect rather than his rational (sensory) perception, becomes a common point of departure. The exhibit takes place in the grand old New York Academy of Science building, whose eclectic interior evokes the bygone age of Enlightenment, humanism, and veneration of science. The tension between the harmonious atmosphere of this neoclassical mansion and the liberal spirit of experimentation emanating from the exhibited works adds a layer of fine irony and dialectic complexity. The event is generously supported by the Blavatnik Family Foundation. 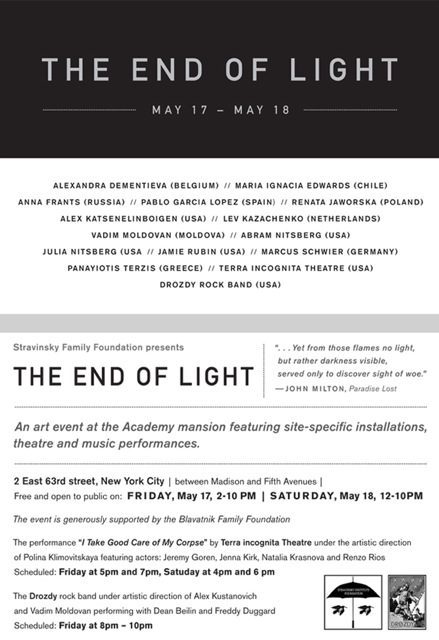 The End of Light

Marcus Schwier, image architect. Born in 1964 in Düsseldorf, Germany, Marcus Schwier discovered his fascination for photography while in school. After earning his architecture degree in 1985, he worked in various architectural offices before returning to school in 1993 — this time to formally study photography at the Düsseldorf Art Academy. While at the Academy, Schwier experimented with camera obscuratechniques. Today, the freelancer works on both commercial and artistic projects, concentrating on landscape and architectural photography. Schwier has balanced the artistic work in his studio in Düsseldorf with his global career. On the one hand, he brings the highest standards to the images he shoots as a commercial photographer working on advertising concepts, brochures, and campaigns for such clients as Mercedes Benz, Audi, Thyssen-Krupp, and Deutsche Bank. On the other hand, he doesn’t lose sight of his artistic ambitions and is always looking for new and surprisingly compelling shots. His ground-breaking “Nightshots,” begun using film photography, builds on his Academy experience of shooting long exposures that emphasize the phenomenon of the night itself more than the subjects of the shots. Schwier explains that the nocturnal scene reduces an image to its barest meaning, since the most essential things are already lit; but almost as an afterthought, his long-exposure shots also succeed in bringing light into otherwise pitch-dark corners and niches, uncovering the strangeness of time and moment. Schwier is the recipient of major prizes and awards, including the DG Bank International Photography Award.